For simplicity, GCSAPP will refer to these devices as vaporizers, as they heat oils from substances such as tobacco or marijuana into a vapor.

Food and Drug Administration (FDA) regulations make vaporizers illegal for people under the age of 18 to possess. Additionally, it is illegal sell and distribute vaporizers to minors. Locally, the Gunnison City Council updated its tobacco ordinance in 2017 to include language clarifying vaporizers as tobacco products. A link to the ordinance can be found here.

According to a report by the Surgeon General, Dr. Vivek H. Murthy, e-cigarette use among high school students increased "an astounding 900 percent" from 2011 to 2015. Some researchers have said that e-cigarette use among youth could act as a gateway to traditional smoking, but the report says the relationship is not yet fully established. Chief among the concerns raised by the report is simply that "nicotine is a dangerous drug" to the developing brain (see more below). 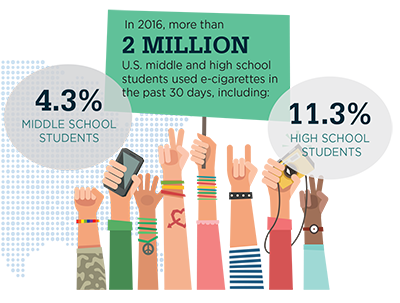 Colorado youth are vaping nicotine at twice the national average and at the highest rate of 37 states surveyed"- U.S. Centers for Disease Control and Prevention.

A separate, more comprehensive state survey shows about half of Colorado high school students have tried vaping nicotine, don't see it as risky and think vaping products are easy to get, even though it is illegal to purchase them as minors.

"Vaping has replaced cigarettes as a way for underaged youth to use nicotine," said Dr. Larry Wolk, executive director and chief medical officer of the Colorado Department of Public Health and Environment. "Too many of our young people don't realize the health risks involved."

To see more data specific to Colorado from the Healthy Kids Colorado survey.